Gown/hat by Tamara Gavrysh. (Not in the picture: a parasol that Tamara designed to go with this outfit and blue earrings.)
More pictures coming soon. 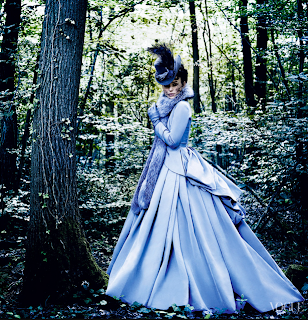 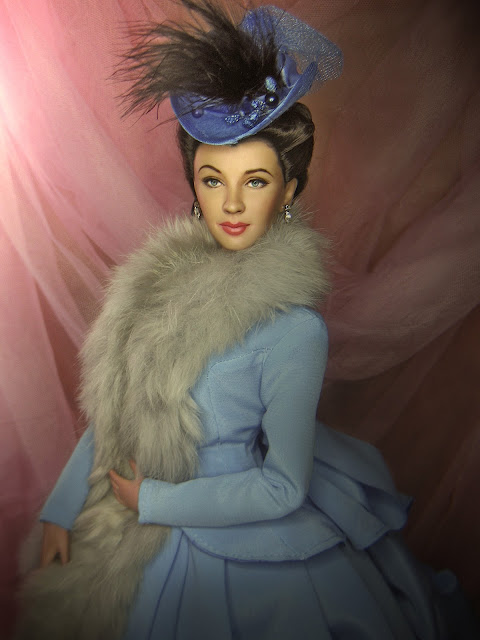 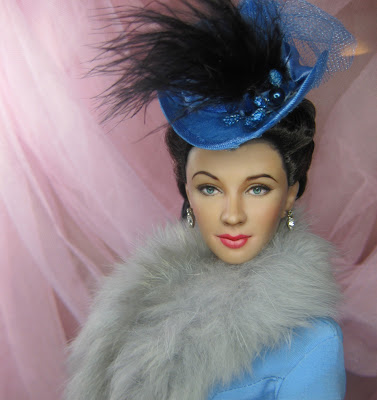 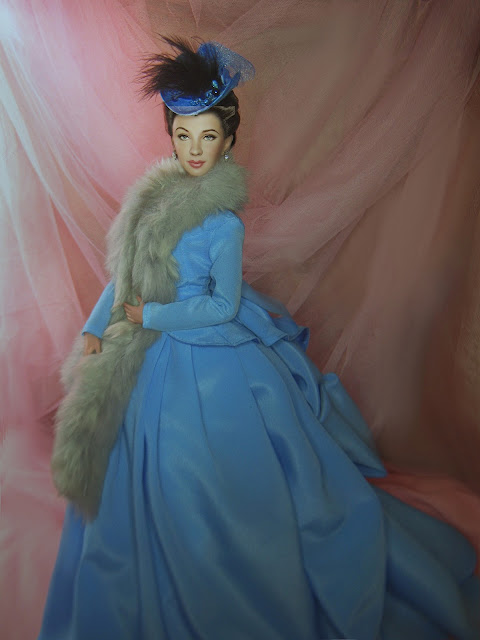 It is hard to imagine any other actress playing Scarlett. But in the years of GWTW was moving from page to screen, people had one person in mind to play Margaret Mitchell's most coveted character.
Bette Davis knew she could give justice to the role too. But negotiations with Warner and Selznick did not settle well (we all know better). Selznick was being offered by Warner: Miss Davis and Errol Flyn to play Rhett Butler. -- a casting for Rhett, even Miss Davis opposed.
Miss Davis was also fresh from her role as the Southern Belle in the film "Jezebel".  "Jezebel" is a Biblical character, a woman of manipulation and schemes who falls. In the film, Bette plays Julie Marsden -- who like Scarlett -- was probably advanced in her sensibilities and opinion of things.  She was also outright rebellious against the customs and traditions of the South, which in the film seemed to be carved in stone in the pride and honor of  New Orleans. The film's setting is 1852 and it is also the period where the outbreak of "yellow fever" occurs, forcing people to be transported to an island to be isolated/quarantined. Here too is the transformation of Julie Marsden -- as she fights for her lost love and redeems her shame -- to be with the one she loves even if it means facing death herself.
For her performance as Jezebel, Bette Davis wins herself her second Oscar (1938) . Two years later,  another Southern Belle role will give an actress first Academy award  -- and consequently worldwide fame.
The doll here is a Tonner Bette and she wears that voluminous white gown that Julie Marsden discards. She wears a  low-cut red gown instead (should have had that made too -- darn!). Rebelling against custom and tradition is her downfall -- she loses her beau.
Gosh I didn't know there was such strict adherence to tradition.  (images below from fanpop.com) 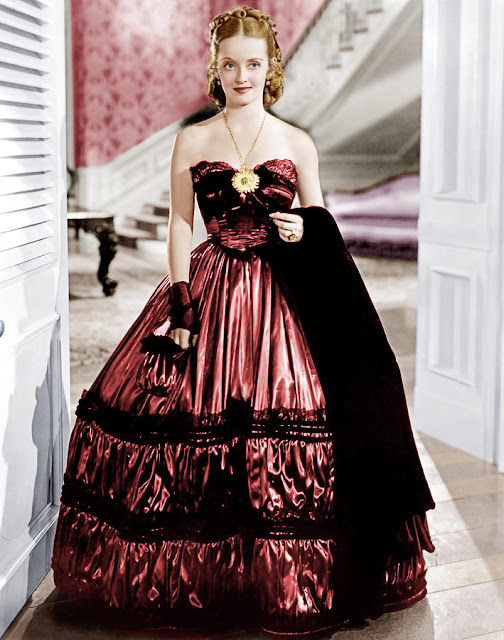 Julie Marsden: Well, shall we go, Pres?
Preston Dillard: Not 'til you're properly dressed.
Julie Marsden: You're sure it's the dress? It couldn't be that you're afraid, afraid somebody'd insult me
and you'd find it necessary to defend me.
Watch some scenes by clicking on the link here.
Tribute to Jezebel, starring Bette Davis
The dress is by Tamara Gavrysh, a very talented doll seamstress who is able to discern the pattern of gowns -- by instinct!
Tamara or Radiola is from Ukraine and she displays great passion in making gowns for dolls. She also does the jewelry and hats for dolls (I will show you some in the coming posts). You will see some of her works in ebay -- replicating the Tonner Scarlett dresses --
I couldn't tell the difference between what Tonner made and what Tamara creates. She's that' good. But she is humble too and admits she has much to learn. What I find charming in her creation are the little details.
There is no existing illustration or sketch of this white dress done by Orry-Kelly -- who dressed Miss Bette Davis in most of her films.
And since there is none, it becomes more challenging as the detail of the layer tulle is hardly discernible. Orry Kelly, the costume designer for Jezebel,  created a vision of white that was light and cloudy with little edgings that fall on the skirt like soft feathers.
Tamara was able to discern the layered tulle as soft as a "veil" -- almost like one piece of tulle attached with thinner panels edged with a loop design.  If you think she just attached the panels you would be surprised because each panel is attached at intervals -- like little "pinched" attachments.  Thus, the entire skirt is as fragile as that gown probably was in the film. Tamara did the head dress and the jewelry here (necklace and bracelet) and managed to create the look as close as possible to the film. Take a look at the little cameo necklace -- that one is attached by magnets from behind. A very delightful way to make attachments.
The hairstyle is done by Monica Khonke -- She's very nice and studies her work very well.  She even did little curls on the sides of the doll's head.  This doll was made possible too thru the help of Miss Arlene Tellez (Thanks Arlene).
Photographed against red velvet to contrast the symbol purity with her inner will and passion.
By the way: Raising a ruckus tonight is a song Jezebel sings in the film.
"Come along little children come along While the moon is shining bright Now get on board going down the river float We gonna raise a ruckus tonight " 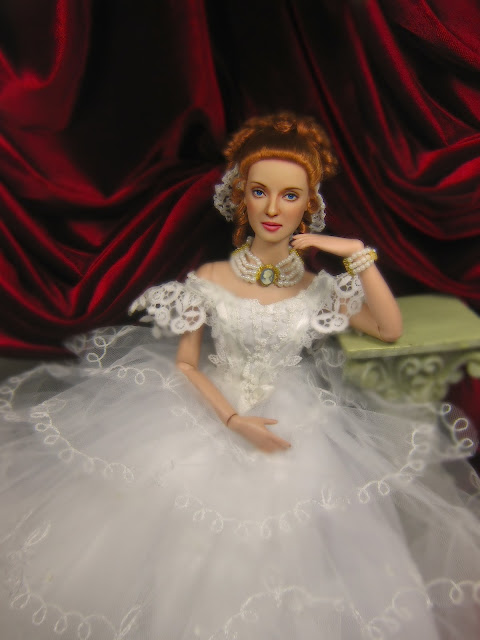 "We have such charming customs down here".
That's why I wore my white dress tonight. I'm being baptized" -- Julie Marsden 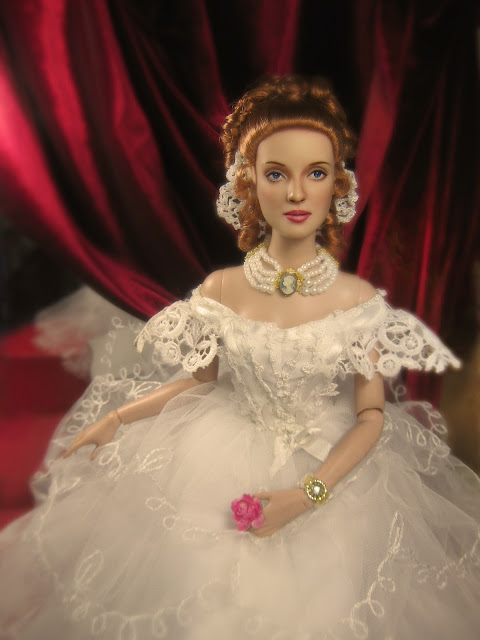 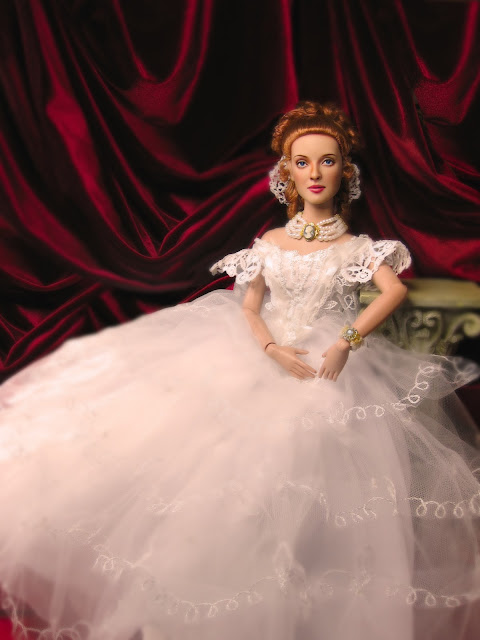 "Oh I'm sorry! I forgot, I'm a child. I'm not supposed to know about things like Gallatan street!
I'm just supposed to flutter around in white! " 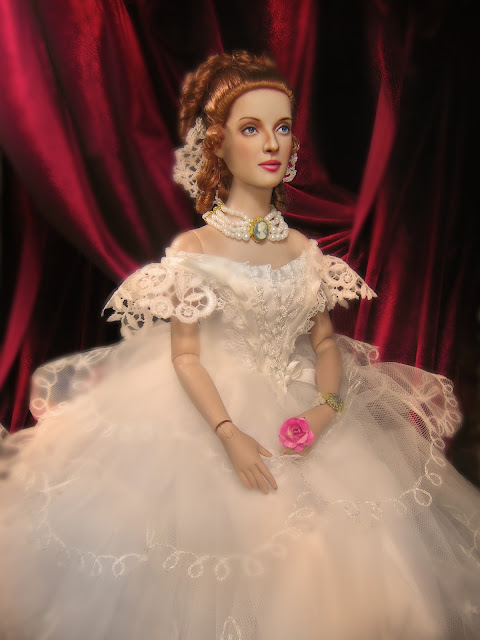 "Pres, I can't believe it's you here. I dreamed about it so long. A lifetime.
No, longer than that. I put on this white dress for you to help me tell ya how humbly I ask you to forgive me. " 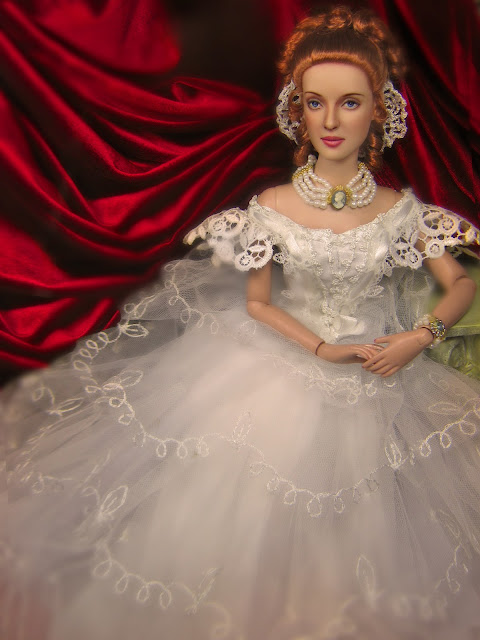 Julie: For heaven's sakes, don't be gentle with me now. Do you think I wanna be wept over?
I've gotta think, to plan, to fight.

Julie: Marriage, is it. To that washed-out little Yankee. Pres is mine.
He's always been mine. And if I can't have him...
*Jezebel movie quotes are all from imdb.com
Posted by Raphael at 11:05 AM 4 comments: