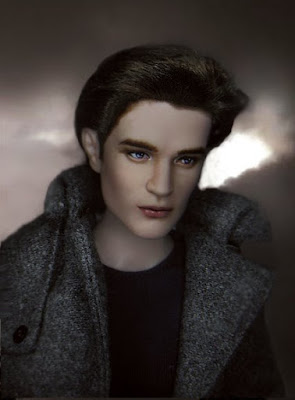 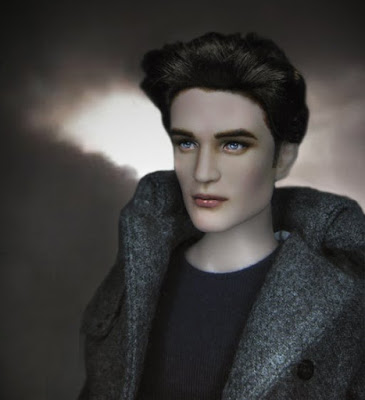 This is probably one of the best sculpts that Tonner did. I wanted a gentler Edward, one like Heathcliff, a dark side but still you could see a loving face. I gave this doll a major haircut and sculpted the hair with gel and dabbing of hairspray. Held by little rubber bands as it dried, but taking them off so they won't leave a mark on the hair. By sculpted that means arranging the hair so that it looks proportional to the face -- less doll-like. The eyes appear blue here but they're actually black with some greys and whites. And of course those little points in the black that glisten. The hardest part for me were the lips. It is hard to find the right solution or mix of paints to capture the actor's lip color (which was actually stained/tinted red) in the film. The sides that frame the face have been painted on too. Edward's face is not rectangular in Twilight but rounded at the top because of hair that falls to the side of his temples. The eyebrows were brushed with a ratio of 3 parts water 2 parts paint then it progresses from there. I wish I had more patience and new brushes though. 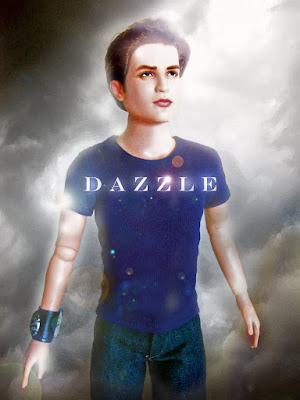 "Dazzle" is a term used in the Twilight story by Stephanie Meyer to describe the unexplained attraction Edward Cullen creates for anyone.
The portrait is Edward exposing himself to the sun -- in the story, vampires who expose themselves to the sun reveal their real skin -- iridiscent like sparkling diamonds.
Tried to capture that here.

My eyesight has gotten worse because of repainting. More photos to follow.
Posted by Raphael at 12:40 AM No comments: