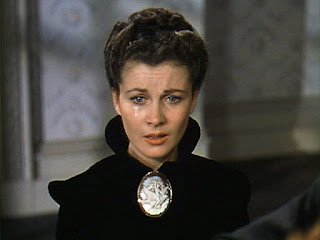 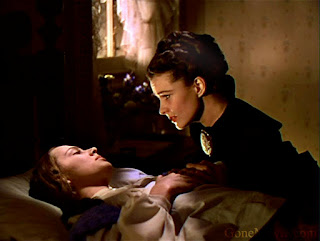 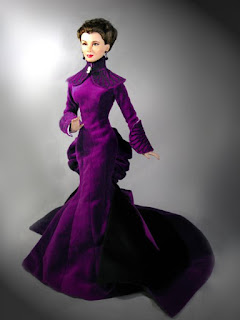 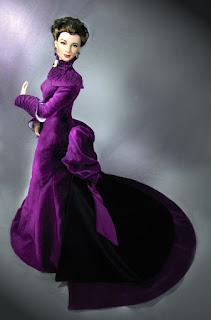 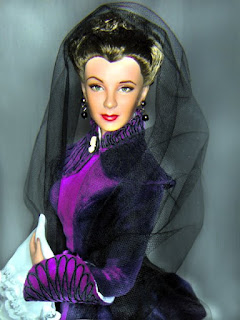 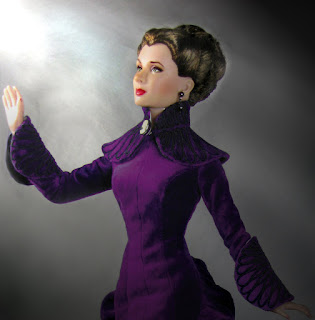 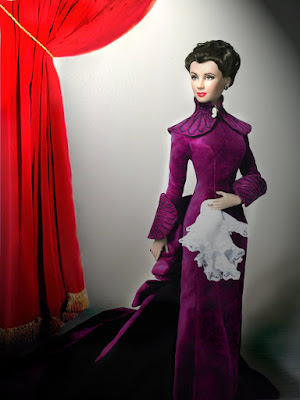 Was it the elegance of this costume? The silhouette that suddenly signaled the change in era of fashion in Gone with the Wind? Was it the symbol of tragedy that it represented? Whatever it is, the final mourning gown of Scarlett worn at the last scenes of Gone with the Wind seems to have captured my attention from  the first time I lay eyes on it. In it is found the irony of grace and turmoil, the mix of elegance and wildness of a woman torn and rejected. And yet, despite her sadness, she finds hope, a dark tormented figure, lying against the deep red carpet of the Peachtree Mansion's staircase.
It had been a wish (and a dream) that Franklin Mint would release this dress. At that time, no other doll could have carried it well than the Franklin Mint Scarlett. But when Tonner released in Fall of 2008 its "In the Mist" costume, collectors were awed by its elegance, smitten by its color (faithful deep purple found in the sketches of Walter Plunkett). The bustle is attached at its bottom and opens at the back for the doll to be dressed. My only gripe was the collar was closed and not open as the one we see on film. The Cameo on the collar has an amazing detail of the profile of a woman - it is not faithful to the cameo we see on film. The skirt is tight, almost forming a serpentina form. The bustle at the back is poufy and is reminiscent of the change of era from the big ballroom skirts to slimmer forms of the late Victorian era.
The train is a double layer of black on purple. It seems much longer than the one we also see on film. A large bow is attached at the top of the train (also in velvet). Completing this look is a tulle veil and dark earrings for the doll. Something we also don't see on film.
That time, no up-do-d Mrs. Butler was released. And so taking things on my hands again, I longed to have a doll as faithful to the image of Vivien Leigh as could be (at least in my eyes). Thus, the portraits of Tonner's Basic Scarlett wearing the In the Mist ensemble, repainted and wearing the In the Mist hairstyle (thanks to Eric C. of Montreal who shared with me close up shots of Vivien Leigh wearing this hairstyle).
The hairstyle is 6 rolls surrounding the crown, all pulled up, each one tied, then gathered. I had to cut the hair and leave some curls at the top. An accident with the hairdryer however caused some burns on the hair which I covered with more curls from the sides and from behind (sigh).
The doll has been repainted following the long, lost look of Scarlett. It was difficult erasing the paint. I do not have the special magic potion available in my country for that = ). It was painted with a 3/0 brush. Not the smallest as such it is not perfect as Noel Cruz or Laurie Leigh, or JACS would have made it. But I am happy.
*Screencaps from Gone with the Wind, Turner Entertainment Video
Posted by Raphael at 7:01 AM